Boxing, war, and modern business... what do these three activities have in common? The obvious answer is that all three take place in competitive environments in which there will be clear winners. Sun Tzu's treatise "The Art of War" not only describes these environments, but also asserts a way to win and analytical method to predict a winner. Once one understands these predictable outcomes, then positioning oneself to be the winner becomes easy. Among these elements, one must include an analysis and implementation of Momentum and Timing.

The best way to describe these elements is to present an example. Boxing's "greatest of all time" (self-professed and seldom refuted) competitor Muhammad Ali, understood Sun Tzu's concept of momentum perfectly.
Sun Tzu said:
"You fight with momentum. There are only a few types of surprises and direct actions. Yet you can always vary the ones you use. There is no limit to the ways you can win."
In boxing, there are four basic punches, but how you put them together can vary. But this is tactical, Sun Tzu deals with Strategic Intent and concepts. Tactics vary by round, but a 15 round fight requires strategy. Ali was a master. His fight against George Foreman exemplifies numerous strategic principles. Foreman was much larger and much stronger than Ali. But Sun Tzu points out that every strength contains a weakness. Foreman's size was his strength but also his undoing.
In Sun Tzu's description, we know that we need BOTH direct action (the standard way of doing things) and surprises. Foreman and Ali, met on a very hot evening and Ali put up a good fight in the early rounds as was his standard. But, then, Ali started taking rounds off, as is also custom practice of some flamboyant fighters when they get ahead on the scorecards. Ali, understood Sun Tzu's principle of "defending until you see the opportunity to attack". Ali put his back to the ropes and slipped and partially absorbed George Foreman's onslaught. Ali did this for several rounds. He knew that "a large enemy is difficult to overturn, but a small enemy is impossible to catch.". Foreman mistook Ali's "rope a dope" strategy to mean that he was close to winning by knock-out so he pushed his huge muscles to continue punching, expending all his resources.
Ali also understood Sun Tzu's principle of timing.
"A hawk suddenly strikes a bird. Its contact alone kills the prey. This is timing."
As Foreman stood with his massive arms hanging at his sides, Ali switched from his standard methods of defending and unleashed his surprise. With a blinding flurry of hard, well-timed and placed punches he leveled the man who had battered him for several rounds. Ali's strategic approach astounded not only Foreman but the announcers and the entire audience.

Ali didn't reveal his intent until his opponent was unable counter it. Further supporting Sun Tzu's guidance that "you must fight only winning battles. Your momentum must be overwhelming. Your timing must be exact."
How does this translate to business or leading an organization? Dear reader certainly you are smart enough to connect the parallels, but I'll provide a few key messages.
1. Momentum is the utilization of non-standard (surprises) AS WELL AS standard practices. Westerners are so indiividualized and want to "get their own way" and "think outside the box". Sun Tzu and I would be very nervous for any organization that wanted to "break all the rules". The success comes when a well-timed innovation is employed within a standard model. Innovation for the sake of innovation is a waste of resources and will likely be poorly received over the long term. Look at "New Coke"... or "Pepsi Clear" or the "Segway". Each created a massive buzz, but ultimately cost their organizations millions of dollars.
Instead, embrace the power of AND.
Such as a great coffee shop with an off-leash dog park just outside! Brilliant! Finding a way to offer complimentary services AT LOW COST to the organization is an appropriate way to innovate in a competitive marketplace.
and only reveal your innovation when your competitors can't defend against it. Too often we over-advertise a "coming attraction". Sun Tzu believes that this form of marketing would only give your opponents time to plan against it.
Always use your opponent's strengths as a weakness by leading them into unfavorable terrain. Foreman's size meant he couldn't quickly recover from his expenditure of energy. Ali recognized that his speed meant he could slip punches until he saw the opportunity to advance his position. Ask yourself: "what is my competitor's primary strength or core competency?" How does my position and core competency make me better positioned? Remember, that parachute that kept you alive on the way down from the airplane turns into an anchor when you land in the water. Positions change and dictate a response. Figure out how to draw your parachute-wearing competitors into the water. but don't do it until you are wearing a life-vest.
Defend until you see the opportunity to advance. Ali stayed in the fight long enough to see his opportunity to advance. This comes back to timing. IF Ali felt he was taking too much punishment, he would have surely pressed back, and did, but only up to the point where he felt safe and kept George Foreman punching. In business, this could mean scaling back on un-profitable activities that don't advance your long-term position. Don't waste your energy directly battling competitors by engaging in a price war to maintain market-share in un-profitable segments. Slip those punches until you see a way to grow in a profitable direction. Only take on high-ROI projects or products. If NPV is negative, WALK away... don't be dragged into their water with your parachute on. Let your competitors expend energy on these projects until their arms are hanging at their proverbial sides as the gasp for air.
Then you strike like the Hawk! 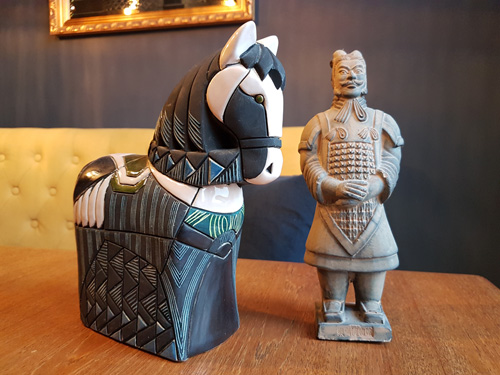